Grab a coffee, because this is soup-to-nuts.

Many people will awaken today to the news of approximately 100 to 150 armed militia taking control of a closed Wildlife Park Headquarters, and not know the full back-story – so here it is:

Militiaman jon ritzheimer has posted a  video, seems to be saying goodbye to his family. He explains why we must stand up to the Federal Government

The short summary is:  in an effort to draw attention to a ridiculous arrest of a father and son pair of Oregon Ranchers (“Dwight Lincoln Hammond, Jr., 73, and his son, Steven Dwight Hammond, 46,) who are scheduled to begin five year prison sentences (turning themselves in tomorrow January 4th 2016), three brothers from the Cliven Bundy family and approximately 100/150 (and growing) heavily armed militia (former U.S. service members) have taken control of Malheur Wildlife Refuge Headquarters in the wildlife reserve.  They are prepared to stay there indefinitely.
Here’s the long version: including history, details, links video(s) and explanations:

Now you can watch this video where Ammon Bundy responds to why he and his brothers are involved. (This was recorded two days ago on Jan 1st):

After a protest rally supporting the Hammond family yesterday, a pre-planned group, including the Bundy Brothers, left a peaceful protest at the Harney County Sheriffs Office and went to the closed (for holiday) Malheur Wildlife Refuge, where they have seized and occupied the refuge headquarters. 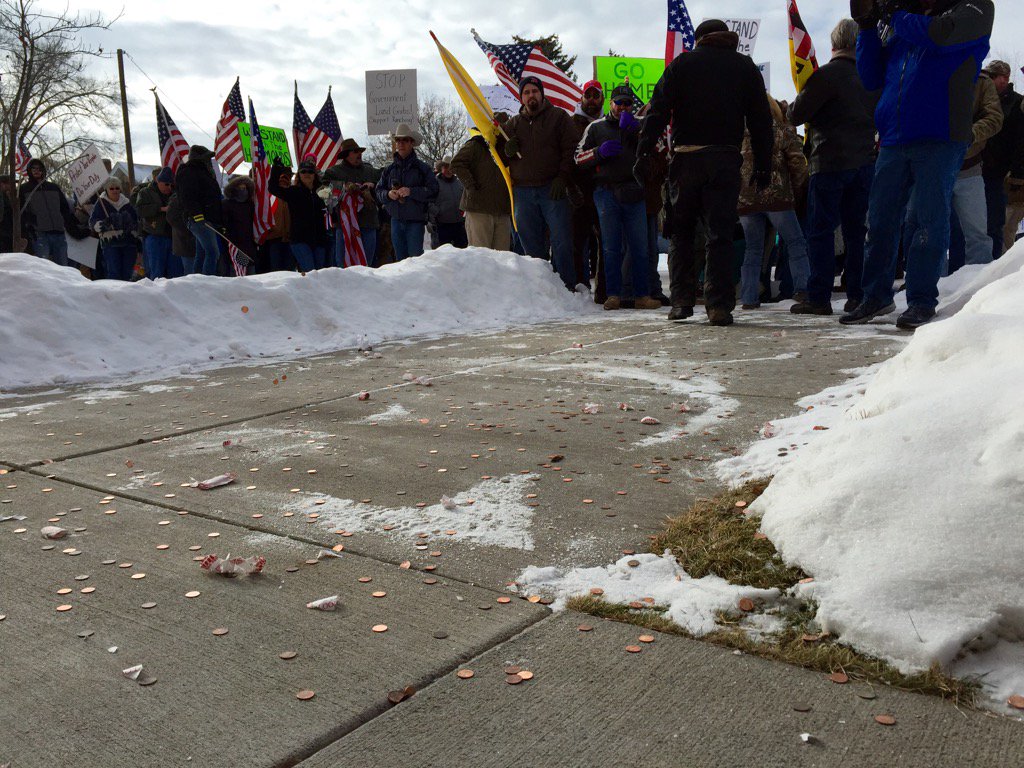 “After the peaceful rally was completed today, a group of outside militants drove to the Malheur Wildlife Refuge, where they seized and occupied the refuge headquarters. A collective effort from multiple agencies is currently working on a solution. For the time being please stay away from that area. More information will be provided as it becomes available. Please maintain a peaceful and united front and allow us to work through this situation.”(link)

(Via Oregon Live) […] The Bundy family of Nevada joined with hard-core militiamen Saturday to take over the headquarters of the Malheur National Wildlife Refuge, vowing to occupy the remote federal outpost 50 miles southeast of Burns for years.
The occupation came shortly after an estimated 300 marchers — militia and local citizens both — paraded through Burns to protest the prosecution of two Harney County ranchers, Dwight Hammond Jr. and Steven Hammond, who are to report to prison on Monday.
Among the occupiers is Ammon Bundy, son of Nevada rancher Cliven Bundy, and two of his brothers. Militia members at the refuge claimed they had as many as 100 supporters with them. The refuge, federal property managed by the U.S. Fish and Wildlife Service, was closed and unoccupied for the holiday weekend.
In phone interviews from inside the occupied building Saturday night, Ammon Bundy and his brother, Ryan Bundy, said they are not looking to hurt anyone. But they would not rule out violence if police tried to remove them, they said.
“The facility has been the tool to do all the tyranny that has been placed upon the Hammonds,” Ammon Bundy said.
“We’re planning on staying here for years, absolutely,” he added. “This is not a decision we’ve made at the last minute.” (more)

Malheur National Wildlife Refuge is located roughly south of the town of Burns, Oregon. The refuge area is roughly T shaped with the southernmost base at Frenchglen, the left top at Malheur Lake and the right top at Harney Lake.

A letter dated January 1st outlines the position of the Bundy brothers, as well as the 150+ in the Militia as it relates to the Hammond family:

With great concern and love and much consideration from prayer, I come to you Harney County Sheriff of Oregon David M. Ward, rancher Steven Dwight Hammond, and rancher Dwight Lincoln Hammond, Jr.,
I, Cliven D. Bundy, have been involved for several weeks in the background striving to understand and comprehend your dilemmas in Harney County, Oregon. I understand that the grass that was burnt on each side of the fence was grazing rights that had been created through beneficial use, one side of the fence being private property and the other side of the fence being private property rights. The fires that were set were for a good purpose and had good results.
The United States Justice Department has NO jurisdiction or authority within the State of Oregon, County of Harney over this type of ranch management. These lands are not under U.S. treaties or commerce, they are not article 4 territories, and Congress does not have unlimited power. These lands have been admitted into statehood and are part of the great State of Oregon and the citizens of Harney County enjoy the fullness of the protections of the U.S. Constitution. The U.S. Constitution limits United States government.
It is my suggestion, Steven Hammond, that you go and check yourself into Harney County jail asking for protective custody. It is my suggestion, Dwight Hammond, that you go and check yourself into Harney County jail asking for protective custody. It is my suggestion, Harney County Sheriff David Ward, accept these two ranchers into your jail, notify the United States Solicitor in Washington DC that you have these two ranchers in Harney County jail, that they will remain there indefinitely under your protective custody and the protection of We the People of Harney County and We the People of the United States of America.
I suggest an Evidentiary Hearing or a Grand Jury be formed by We the People.
I feel that this action is immediately important, that it should be taken place before 10:00 am Saturday, January 2, 2016. I will hold these suggestions private until that time then I will release this letter to those having state and county jurisdiction and to the media.
Cliven D. Bundy (LINK)