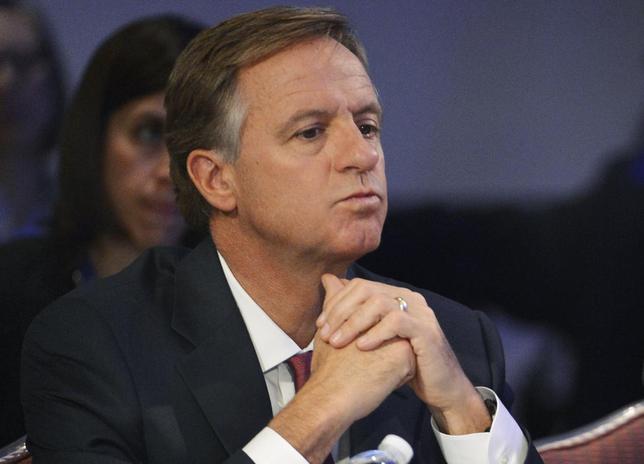 Tennessee Republican Governor Bill Haslam listens during the National Governors Association Winter Meeting in Washington, February 22, 2014.
REUTERS/MIKE THEILER/FILE PHOTO
Educators and other full-time staffers at Tennessee’s public state universities and colleges will soon be able to carry handguns on campus after Governor Bill Haslam allowed a bill to become law on Monday without his signature.
The bill that the Republican governor allowed to become law had little opposition in both houses, easily passing 69-24 in the House and 28-5 in the Senate last month. The law will go into effect on July 1.
The law, which affects 50 state institutions, was opposed by both the State Board of Regents and the University of Tennessee system.
Gun control on college campuses is a growing focus in the national debate over access to guns.
Including Tennessee, 10 states now allow guns on campus, although the Tennessee and Arkansas laws allow only faculty and staff to carry handguns, according to the National Conference of State Legislatures, which tracks policies in all 50 states.
In Georgia, Governor Nathan Deal, a Republican, is expected on Tuesday to either sign or veto a measure that would allow licensed gun owners ages 21 and over to carry concealed handguns on the campuses of public colleges and universities in that state.
On Aug. 1, 2016, a so-called campus carry law takes effect in Texas, allowing people 21 and older with a concealed handgun license to carry handguns in classrooms and buildings throughout the University of Texas system.
In Tennessee, anyone carrying a gun under the new law must have a permit and notify local police or campus security, whichever has responsibility for law enforcement on campus. Students are not allowed to carry handguns on campus.
The law does not allow handguns to be carried into arenas and stadiums during school-sponsored events, and guns are barred in meetings related to disciplinary or tenure matters.
Haslam had said he did not believe the state should get involved in such local matters, but chose not to veto the bill.
“Although SB 2376 does not go as far as I would like in retaining campus control, the final version of the bill included input from higher education and was shaped to accommodate some of their concerns,” he said in a Monday statement.
Proponents said the bill will lead to greater safety on campuses. Opponents voiced concern about the safety of students, faculty and visitors on campus.
(Reporting by Tim Ghianni; Editing by Ben Klayman and Matthew Lewis)

Adam Tamburin, The Tennessean , WUSA 12:28 PM. CDT June 18, 2016
At 8 a.m. Monday, police at the University of Tennessee will start registering employees who want to carry guns on the Knoxville campus, signaling the start of a new era for public schools across the state.

A law opening college campuses to guns goes into effect July 1. Institutions, working alongside law enforcement, have scrambled to rewrite policies, develop new programs and work through hypothetical hiccups to meet the deadline.
Under the law, full-time employees — including professors and staff members — with the necessary permits can carry concealed handguns with them on campus. But anyone who wants to carry will have to register with campus or local law enforcement first.