Uncertainty prevails on day before Greece starts returns of migrants

There was little sign of preparation on either side of the Aegean less than 24 hours before Greece was due to begin returning migrants to Turkey, and Greek and Turkish officials gave conflicting information on the logistics of the plan.
The returns are a key part of an agreement between the European Union and Turkey aimed at ending the uncontrollable influx into Europe of refugees and migrants fleeing war and misery in the Middle East, Asia and Africa.
Under the deal, those who cross into Greece illegally will be held and sent back once their asylum applications are processed. For every Syrian returned, one Syrian will be resettled to Europe directly from Turkey.

So far, more than 6,000 migrants and refugees have been registered on Greek islands since March 20, the date on which the agreement came into force. Where they will depart from, to where they will be sent, and even how many people will be taken back to Turkey under this deal on Monday, remains unclear.
On Sunday, there were few signs that Lesbos, the island hundreds of thousands of people passed through on their way to northern Europe, was getting ready to send back migrants. A police spokesman said the force was still awaiting instructions.
Across the Aegean in the coastal town of Dikili, which a Turkish official said would receive refugees sent back from Greece, just two room-size tents were set up on the pier of its cramped port on Saturday. Two portable toilets were installed nearby.
Further south, four small blue tents were set upon the town of Cesme for those sent back from the Greek island of Chios.
Turkey’s interior minister, Efkan Ala, was quoted by the pro-government newspaper Aksam as saying 500 people were expected in Turkey from Greece on Monday. Afghans, Iraqis and Pakistanis would be deported to their countries, he said.
The Athens News Agency reported over the weekend that the returns would begin on Monday morning on two Turkish passenger ships chartered by Frontex, the EU border agency. Some 250 people would be returned each day through Wednesday, the report said, without citing sources.
“Planning is in progress,” George Kyritsis, a Greek government spokesman for the migration crisis told Reuters. “I will not confirm any report.”
Kyritsis said returns would take place on Monday, “barring any massive hurdle which cannot be overcome” but they would not be of people who have applied for asylum. The numbers being floated “had come out of thin air,” he said.

“CHALLENGING AND VOLATILE”
More than 51,000 migrants and refugees remain in Greece since border closures along the Balkans last month. Hundreds of migrants who on Friday broke out of the Chios holding facility in protest at the deal are at the island’s port. Hundreds of migrants in mainland Greece are also protesting to demand the borders open.
Arrivals to the islands remained steady on Sunday, two weeks since March 20, with 514 migrants, including many Syrians and Iraqis, crossing from Turkey through Sunday morning. Of those, 364 arrived on Lesbos, authorities said.
Many of those rescued by the Greek coast guard off Lesbos were unaware they would be sent back to Turkey.
Greece’s parliament passed an asylum amendment bill on Friday needed to implement the agreement. The legislation does not explicitly designate Turkey as a “safe third country” – a formula to make any mass returns legally sound.
The UN refugee agency (UNHCR) and human rights groups have denounced the agreement as lacking legal safeguards. Amnesty International called it “a historic blow to human rights” and said it would send a delegation to Lesbos and Chios on Monday to monitor the situation.
UNHCR’s spokesman on Lesbos, Boris Cheshirkov said there were still gaps in both Greece and Turkey that need to be addressed.
“We’re not opposed to returns as long as people are not in need of international protection, they have not applied for asylum,” he said.
More than 3,300 migrants and refugees are on Lesbos, an island of mainly Greek refugees who fled Turkey in the 1920s.
About 2,800 people are held at the Moria center, a sprawling complex of prefabricated containers, 800 more than its stated capacity. Of those, 2,000 have made asylum claims, UNHCR said.
Aid agencies have pulled out of Moria since it became a closed facility last month and in protest at conditions there. Journalists have been barred from entering the site and holding centers on four other islands.
Condition on Lesbos were “challenging and volatile,” UNHCR said, with insufficient food and pregnant women and children among those held. Families have been separated since the deal, with some members inside Moria and others elsewhere in Europe.
“Many of those who have arrived here have experienced horrendous wars,” Cheshirkov said. “To be put in a closed environment feels like punishment whereas seeking asylum is not a crime, it’s a fundamental human right.”
(Additional reporting by Murad Sezer in CESME and Lefteris Papadimas in ATHENS; Writing by Karolina Tagaris; Editing by Raissa Kasolowsky) 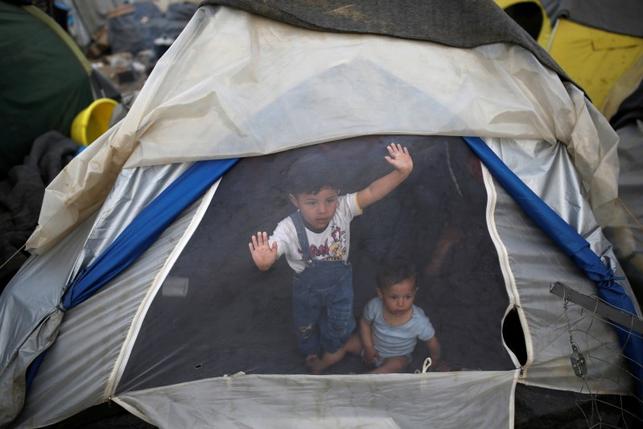 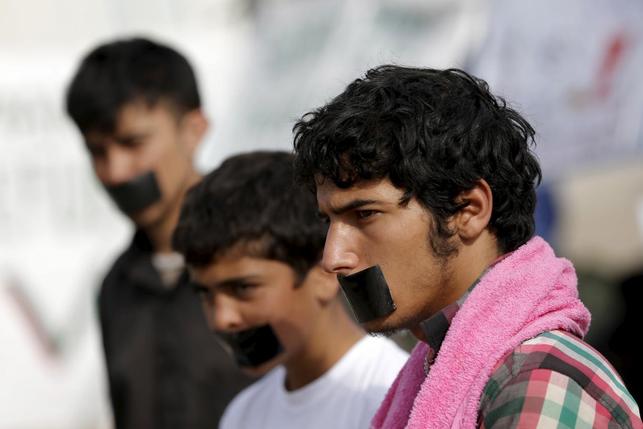 Migrants and refugees with their mouths taped stage a protest at a makeshift camp at the Greek-Macedonian border near the village of Idomeni, Greece, April 1, 2016.
REUTERS/MARKO DJURICA