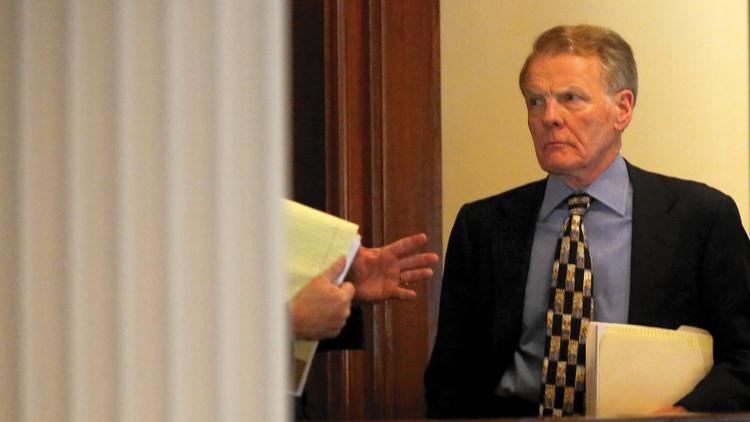 The Democrat-controlled Illinois General Assembly and the Chicago City Council and are struggling to rally support for their so-called progressive agendas. (Antonio Perez / Chicago Tribune)
Editorial Board  May 7, 2016
Sea change usually doesn’t wash over the political environs of Chicago or Springfield. Transformation in government, if it comes at all, flows so slowly it can be undetectable. But in recent months, if you were standing still, you might have felt subtle shifts.
The Illinois Way — tax, borrow, spend — seems to be losing its appeal. The Democrat-controlled Chicago City Council and Illinois General Assembly are struggling to rally support for their so-called progressive agendas. Even proposals that would tax the rich are flopping, despite the blockbuster success of class warfare politics practiced by Democratic candidates for president Hillary Clinton and Bernie Sanders.
In Springfield, recent casualties include a graduated state income tax proposal that would have punished upper-income earners. The House sponsor, Rep. Christian Mitchell, D-Chicago, didn’t call the measure for a vote because he couldn’t muster enough support despite his party’s supermajority.
House Speaker Michael Madigan has been unable to build enough support for his proposal to add a tax surcharge on millionaires. Remember, he’s the speaker.

And legislation in Springfield that would rescue Chicago Public Schools has floundered for at least two years. CPS officials and the Chicago Teachers Union have been begging for more tax money from the city and the state. CTU recently released a proposal to increase taxes on gasoline, property, hotels — a long list — to prop up the district’s budget.
But such pleas now go largely ignored. Mayor Rahm Emanuel shut the door to the CTU’s tax plan almost immediately.
Schools CEO Forrest Claypool basically admitted the district, now rated at junk bond status, can only access lines of credit as it tries to limp along. Long-term borrowing isn’t feasible because the interest rates imposed on the nearly-insolvent district are too high.
Yet no one is bailing out CPS, not City Hall or the state, as they have in the past under similar “doomsday” scenarios.
Meanwhile, the public reacted sourly to Emanuel’s plan to borrow $1.2 billion for a George Lucas museum on the lakefront. With Chicago schools destitute, teachers threatening to strike sometime this year and violent crime climbing, a taxpayer-enabled favor for a billionaire filmmaker hit a collective nerve.

Emanuel, with his subservient City Council of fellow Democrats, usually gets what he wants, especially shiny new baubles. Not happening this time.
What gives?
Perhaps Democrats are realizing that this city and state cannot tax their way out of debt or into prosperity. The temporary state income tax hike of 2011 took an extra $31 billion out of taxpayers’ pockets but — despite Democrats’ forceful promises — did little to change the debt-driven trajectory of state government. Taxpayers are still paying a rate of 3.75 percent, a rate one-quarter higher than before the hike. It has made no difference. Illinois’ unpaid bill pile grows every day.
Chicago taxpayers will see a spike in this summer’s property tax bills, thanks to Emanuel and the council approving the largest property tax hike in the city’s history last fall — $755 million in new taxes and fees. Yet the city still will be awash in pension liabilities and other debts.
CPS will raise its property tax levy to the maximum allowed, and it’s not enough.
All of this comes in addition to a new study confirming that Illinoisans pay the highest median property tax rate in the country. California-based analytics company CoreLogic reviewed real estate taxes nationwide. The study found that an Illinois property owner with a home valued at $200,000 will, on average, pay $2,720 more in property taxes annually than the national average.

Oh — and have you heard that, with an assist from Cook County Board President Toni Preckwinkle and her board’s Democrats, Chicago’s sales tax is now the nation’s highest? Lots of consumers who shop elsewhere can tell you all about it.
This page has been writing, arguably not enough, about taxpayers’ debts and public sector pensions for decades. One 1991 editorial hammered lawmakers and then-Gov. James Thompson, a compliant Republican, for agreeing to a new pension funding formula and then ignoring the payment schedule. Under the deal, Thompson’s own pension doubled.
But if the failures of Democratic, progressive fiscal policies in Chicago and Springfield are any indication, perhaps voters are finally keen to the Ponzi schemes. The long reliable tax-borrow-spend model has not worked, is not working, will not work, and voters know it. They’re rebelling with their moving vans.
When Democrats can’t get their own tax-the-rich proposals through a supermajority House and Senate, after multiple tries, that’s a sign of change. When Chicago and Illinois officials balk at borrowing money for a museum construction project, that’s a sign of change. When citizens get wise to the tax-borrow-spend selfishness of forcing Tomorrow to pay for Yesterday and Today, that’s a sign of change.
It’s about time.