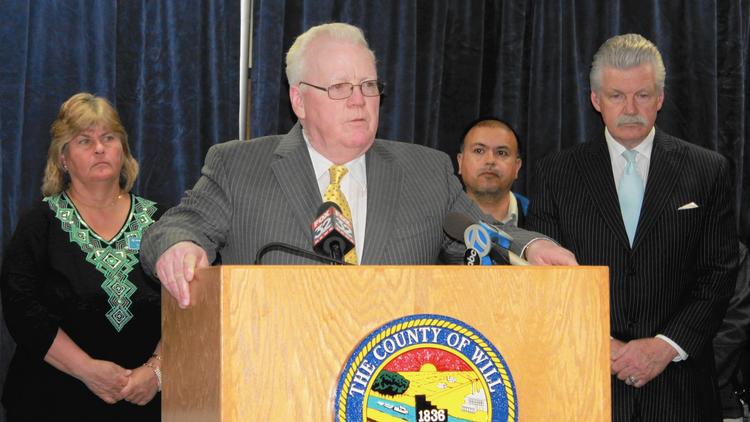 Despite accusations of dirty politics and unethical conduct, the Will County Board unanimously approved $426,000 in funding for its Health Department, averting a significant number of layoffs and program cuts, but stressed that this is only a temporary measure to solve a crisis created by the lack of a state budget.
The action came during Thursday’s board meeting after a raucous 90-minute discussion during which Republican caucus leader Chuck Maher, R-Naperville, called for an investigation of the Health Department to make sure that its staff is professionally qualified, licensed and held to proper ethical standards.
Facing a $2.1 million shortfall from the state, the county’s health board decided to lay off 58 staff members and suspend nine programs by May 27, the halfway mark in its fiscal year, which ends Nov. 30
According to AFSCME Local 1028 President Dave Delrose, 28 staff members will still be laid off, as the department will not be reinstating its Family Case Management program.
“It’s sad they could not do more,” he said.
The Health Department will be able to maintain its Adult Mental Health services, the Crisis Response Program and the Juvenile Justice program through the end of the fiscal year, at which time more cuts may have to be made, officials said.
Instead of giving the department an additional $426,000, the county board instead will allow it one more year to repay the $3 million it borrowed from the county in March. That loan was to be repaid when tax revenues arrived in June.
“This will not be a revolving charge card. You still have to make tough decisions to cut programs and workforce,” said County Board Speaker Jim Moustis, R-Frankfort Township.

Health Department Executive Director Susan Olenek said it will not be “business as usual” in the future.
“This $426,000 buys us time to transition our clients to other providers and not slam the door in their faces,” she said.
Historically, the Health Department has been fiscally responsible, cutting personnel four times in four years, she added.
Some board members questioned the 2.5 percent wage increase union employees will receive June 1, but Olenek said the department is “contractually obligated” to pay that.
During the discussion, Republican leaders slammed the process, claiming the Health Department gave them an “artificial drop-dead date,” the union politicized the crisis and department doctors threatened at least one board member.
Moustis accused the health board of imposing an “artificial” May 27 deadline to pressure the County Board into making a decision before it had all the information it needed.

Then, the union and county Democratic officials “furthered the crisis” by holding a May 9 press conference, which took the issue “out of the solution bucket and put it in the political bucket,” he said.
“It was all about trying to make the Republican majority look bad,” Moustis said.
Maher, who initially passed on voting, read a lengthy statement before changing his vote to support the loan, during which he attacked County Executive Larry Walsh, D-Elwood, who is seeking re-election in November.
He also accused doctors of making “threatening” phone calls to him on Health Department phones during work hours, and having their patients call him.
Walsh should have come to the leaders to facilitate a solution, instead of going to a press conference, Maher said, and should have attended committee meetings where Health Department funding was discussed.
“Instead you played it out in the media and called for special meetings,” Maher said. “We need leadership that is willing to work together, not when it looks good but all the time.”
He accused Walsh of trying to “win back favor from the union” after a 2013 strike.
Walsh called for a special meeting following Thursday’s regular meeting after the board’s executive committee rescinded a vote after many had left its May 19 meeting to bring the loan request to the full board for discussion
The day after Walsh set the special meeting, Moustis added Health Department funding to Thursday’s agenda.
But when Walsh convened the special meeting which had been posted — even though action was no longer needed — Republican leaders Moustis, Maher and Mike Fricilone, R-Homer Glen, left the room.
Board member Suzanne Hart, R-Naperville, left the regular meeting earlier, before the vote was taken.
“That was a show of disrespect to me,” Walsh said, adding that he thought Maher’s comments were in “bad taste.”
The executive committee “created the situation,” he said, by voting not to allow the funding issue to go to the full board “after everyone left the room.”
Both Walsh and union leader Delrose said they were unaware that Health Department staff and clients had made calls to Maher.
“Clients have a right to be heard, but there is an appropriate way to do that,” Delrose said.
He said this was “never a political issue” from the union’s point of view.
The union called the press conference to “bring awareness to the issue” and invited elected officials who were “stakeholders” and could comment on the impact the loss of services would have on the community.
In addition to Walsh, others who attended were Sheriff Mike Kelley and State’s Attorney James Glasgow, both Democrats.
“The people who are making those accusation (of politics) are making it political,” Delrose said.
Clients and health care providers did address the board prior to the vote, saying many other providers have cut mental health services, resulting in a six-month waiting list for patients who need daily medication.
slafferty@tribpub.com