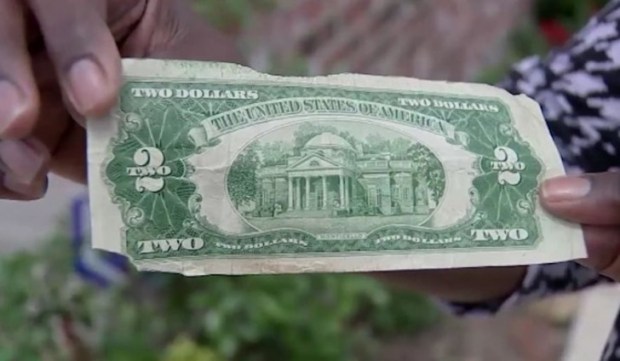 School Calls Police on Girl Using 2 Dollar Bill to Buy Her Chicken Nuggets! It Gets Worse!

When 13-year-old eighth grader, Danesiah Neal, tried to spend a 2 Dollar Bill at lunch at Christa McAuliffe Middle School, she was detained and threatened with a felony!

It gets worse! The 2 Dollar Bill investigation had to go all the way to the bank to get solved!
I am beyond disbelief at the STUPIDITY at this Texas school, and with the Fort Bend police who carried on with the blatant ignorance that had to be involved! (Besides the fact that it was only $2).
“I went to the lunch line and they said my 2 Dollar Bill was fake,” Danesiah told Ted Oberg Investigates. “They gave it to the police. Then they sent me to the police office. A police officer said I could be in big trouble.”
Not just big trouble. Third-degree felony trouble.
School officials called Daneisha’s grandmother, Sharon Kay Joseph.
“She’s never in trouble, so I was nervous going in there,” she recalled to ABC13.
The officials asked, “‘Did you give Danesiah a 2 Dollar Bill for lunch?’ He told me it was fake,” she said.
Then the Fort Bend ISD police investigated the 2 Dollar Bill with the vigor of an episode of Dragnet, even though at that school 82-percent of kids are poor enough to get free or reduced price lunch.
The alleged theft of $2 worth of chicken tenders led a campus officer — average salary $45,000 a year — to the convenience store that gave grandma the 2 Dollar Bill.
Next stop — and these are just the facts — the cop went to a bank to examine the 2 Dollar Bill.
The bill went from the lunch lady, to the school officials, (Obviously the principals Mary Brewster and James Wade Kirkpatrick HAD to know the cops were involved), to the cop…who took the $2 Bill to the convenience store..and then to the bank.
The long line of IGNORANT people that this CRAZINESS had to go through before the bank explained that there is such thing as a 2 Dollar Bill is unfathomable! They should all be fired for sheer stupidity!
From all the idiots that had to be involved at Fort Bend ISD’s Christa McAuliffe Middle School, to the Keystone Cops involved, you would think SOMEONE would have recognized the real currency!
Instead, they threaten a poor little girl with a felony and made her miss lunch!
Explain to me how NO ONE said the words, “There is such a thing as a 2 Dollar Bill”?
Explain to me how NO ONE has YET said the words, “I am sorry”.
THIS is just one of eight counterfeiting charges investigated in Fort Bend ISD since 2013 mind you.
You know the routine!
There has yet to be an apology from the school!
I would demand some resignations just for the sheer stupidity of those involved, but that is the way I am! These are our EDUCATORS and Law Enforcement!!!
These people put a black mark on some of our finest! Call/Email the school and share your outrage!
McAuliffe Middle School Phone: (281) 634-3360
Principal Mary Brewster
Mary.Brewster@fortbendisd.com
8th Grade Principal James Kirkpatrick
James.Kirkpatrick@fortbendisd.com
Superintendent of FBISD Schools
Charles E. Dupre, Ed.D.
charles.dupre@fortbendisd.com