Presumably this drama will end the way the Carrier drama of early 2017 ended, with a spotlight PR victory for the president followed by quiet layoffs once the cameras went away and widespread fears among employees that the plant would indeed eventually close at “a more politically opportune moment.”

Then again, GM isn’t Carrier. The country’s largest auto manufacturer is never out of the spotlight. Presumably some corporate PR strategy already exists to deal with Trump’s inevitable complaints about the company being “ungrateful” or whatever. Did they announce the plant’s closure with every intention of reaching some sort of deal with the White House to reopen it again — a kabuki closure, if you will?

If so, what does GM want from that deal? Tax breaks and what else? 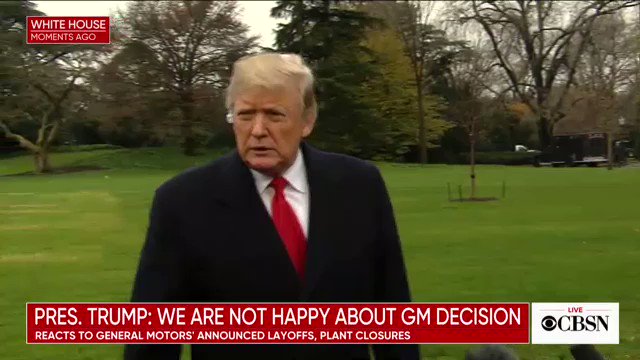 “They better put something else in”: President Trump expresses his disappointment in GM’s announcement of plant closures and mass layoffs https://www.cbsnews.com/news/gm-to-close-canadian-plant-and-may-shed-more-jobs/ …

“They better damn well open a new plant there very quickly,” he told the WSJ afterward, claiming that he told GM CEO Mary Barra in a phone call last night “you’re playing around with the wrong person.” Sherrod Brown, newly elected as a senator in Ohio and a potential 2020 contender, was unhappy too:

“The workers at Lordstown are the best at what they do, and it’s clear once again that GM doesn’t respect them. Ohio taxpayers rescued GM, and it’s shameful that the company is now abandoning the Mahoning Valley and laying off workers right before the holidays. Even worse, the company reaped a massive tax break from last year’s GOP tax bill and failed to invest that money in American jobs, choosing to build its Blazer in Mexico,” said Brown. “GM owes the community answers on how the rest of the supply chain will be impacted and what consequences its disastrous decision will have on the Mahoning Valley and our state. My office stands ready to do everything we can to help these workers. This decision is corporate greed at its worst.”

When you factor in effects on the supply chain, some 49,000 jobs overall in North America could be affected. Follow the last link and read the Free Press’s analysis and you come away thinking that GM chose this moment simply because the economy’s so good. When, not if, a recession hits — and we’re about due — it’ll be difficult politically for the company to justify layoffs. Jobs will be hard to come by for laid-off workers. That’s less true at the moment, so this is when the axe falls. All of which assumes that they really, truly do intend to close the plant, though, instead of essentially holding the jobs for ransom to see what Trump and the state government in Ohio will offer them to keep it open.

If GM does follow through by closing the plant, there may be only one thing left to do: State-run car company. Why not, if a state-run media company is on the menu?

While CNN doesn’t do great in the United States based on ratings, outside of the U.S. they have very little competition. Throughout the world, CNN has a powerful voice portraying the United States in an unfair….

….and false way. Something has to be done, including the possibility of the United States starting our own Worldwide Network to show the World the way we really are, GREAT!

47.5K people are talking about this

America already has two state-run TV networks, Voice of America and Fox News primetime, but we haven’t had a state-run auto manufacturer since GM was briefly Government Motors. Trump’s probably on the phone with Mattis as we speak asking if the Pentagon knows anything about designing cars. Either that or the whole “state-run TV network” idea in his tweets is just more vaporware. Which do you suppose it is?